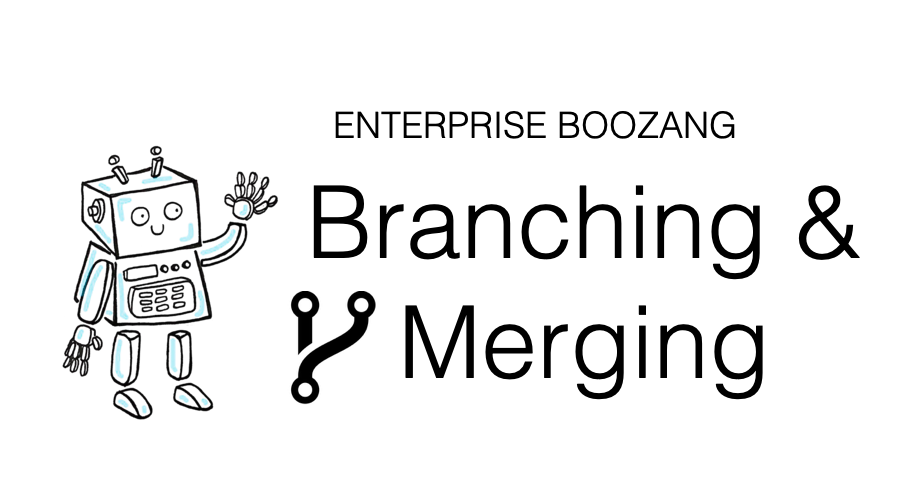 This article explains how to use branch and merge functionality in Boozang, and how to align your test automation work in a software project running on several branches at once.

Boozang is Cloud-based and uses it’s own servers to store the test automation scripts that is created. Just like developers might use a versioning system to branch and merge their code, Boozang also supports branching and merging, allowing you to align the automation code with the software updates, maintaining the same ways-of-working for automation and code.

In this example we show how you can branch your automation code for a patch, and follow up with an example which is more close to a real-life scenario.

Disclaimer: This functionality is still in Beta.

Branching and merging of code

When running small scale software projects, it’s often ok to work in a single branch of code. As the team scales up, it’s helpful to work on different branches. The simplest example of this is when a software branch is needed to deliver a patch for a specific bug-fix.

In Git, a branch can be created easily using the checkout command

The developer works on the “patch_tr456” branch and keeps making commits until it’s ready to be merged. When it’s finally time to be included in the original branch, the code needs to be merged back

As you can see, the acton of merging is done from the branch which is being updated. One can say we are “merging ‘patch_tr456’ into master”.

There is a good reason for this. If someone has updated the “master” branch in a way that conflicts with the change in “patch_tr456” (meaning the same files was updated in the same place) we will have a conflict.

Branching and merging in Boozang

For automation code, it’s often not needed to create branches for individual bug fixes. It’s often better to let tests fail, and wait for bug fixes to be delivered without “green-lighting” any potential bugs.

On the other hand, where you have bigger fixes, it can still be interesting to branch the automation code to support regressions for a newly introduced bug.

Creating a branch in Boozang

Working in the branch

After you have created a separate branch, the branches will show up in the dropdown in the root of the navigator.

As long as you make sure you are in the right branch, you can work securely without impacting the other branches. Complete the work in a branch, until you are ready to merge it into to your main working branch (usually “master”).

As soon as you select the branch to merge from, you will see all the changes being displayed.

Usually, using the default settings is fine. If you want to “cherry-pick” changes, or if there is a need for a manual merge, that is also supported

Usually it’s recommended to keep this process simple. If you aren’t sure of a change, keep the version in the “master” branch. You can always run the merge a second time if you need to merge in more changes from the “patch_456” branch.

Aligning with the SW process

Imagine the following typical scenario. The code being developed is maintained in 3 different branches

The master branch is being used for the normal work-flow, adding bug fixes and minor code updates on a daily basis. The “ver40” branch represent a future release, and is actually “ahead” of master. The release branch is “behind” master and is used to create stable releases into production.

The challenge in test automation would be to allow for the creation of new tests for “ver40” features, without breaking any of the existing tests. In Boozang, the easiest way to handle this is simply to replicate the exact branches on the Boozang side.

Imagine the follow regular release at the end of a Sprint

Now, imagine a larger release when “ver40” needs to be deployed.

As you can see, you can maintain the same ways of working in these two cases. There are some benefits with this approach

There are also some drawbacks

In the end, you decide what works for your team.

On the other hand, when dealing with large bug-fixes or releases, it’s better to branch off the automation code, making sure the main pipeline is working. By branching off the automation code, you can be prepared for whenever the larger fix is merged for deployment into production, and be less reactive when it comes to these bigger release events.